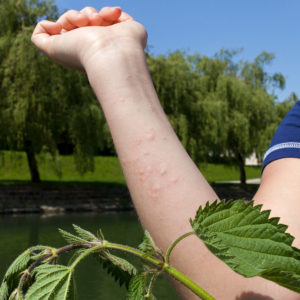 Urticaria is a commonly seen skin disease affecting about 20% of world’s population at some point in life. Its onset is sudden and spontaneous as a result of stimulus, developing itchy reddish welts which resolve within up to 24 hours leaving no residual marks.

About 50% of urticaria flares are accompanied by severe swelling throughout the body – the so-called angioedema – which can last for up to 72 hours.

The disease is a result of several different phenomena within the body, most of them are still unclear. Current scientific knowledge shows that most urticaria flares are caused by non-allergic mechanisms. This means that, in most of the cases, urticaria is not an allergy!

In an urticaria process, a substance called histamine – which is produced by a human cell named mast cell – is released. When released into human body, this substance causes an urticaria flare, because histamine works on blood vessels and the skin, causing swelling and redness.

Stinging nettle The word urticaria is derived from the name of a plant (stinging nettle) found in abundance in Brazil. Its scientific, Latin name is Urticaurens. When its leaves touch our skin, local redness and itching occurs, caused by the release of an irritating substance from its leaves’ hairy surface.